Recently, this photograph was donated to the Sherburne History Center.  We have very little information to go with it.  We know that it was given to the Becker VFW many years ago.  That is about all!  We think this might be the Minnesota National Guard unit posing in front of a barracks at Camp Ripley.  But that is a guess.  Anyone with any skill at identifying photographs, your help or suggestions to identify this photo or the men in it would be appreciated. 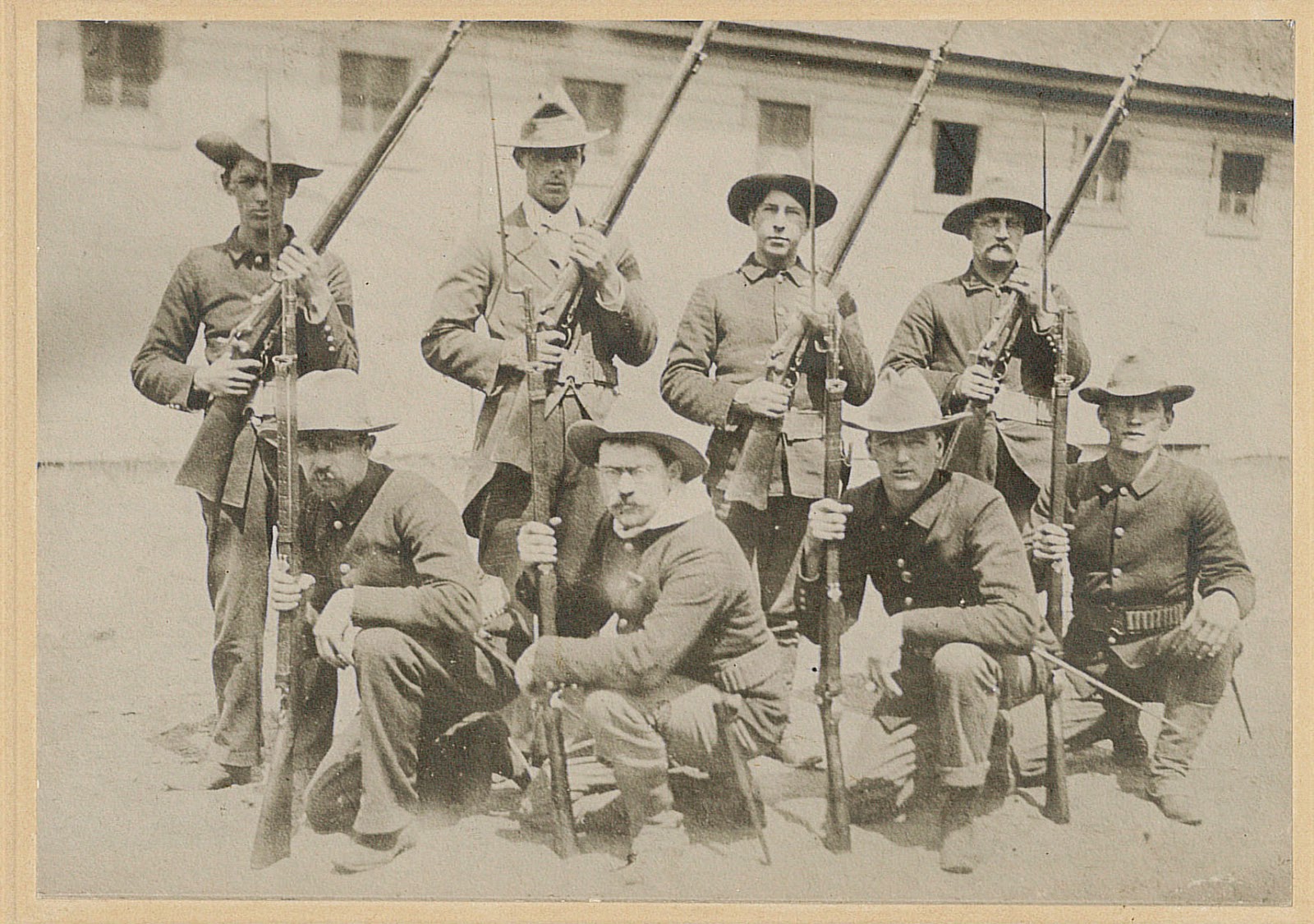 Posted by Mike Brubaker, Executive Director at 6:45 AM No comments:

Why Family History Can Be So Challenging

The following two announcements reinforce the idea of “trust but verify” in family history. They also suggest why family history research can be so much fun yet so challenging.

The two announcements were published in the Sherburne County Star News on 6 February and 13 February 1896 in the “Becker News” column on page 5.  Even the most intrepid of news reporters and correspondents can get the facts wrong.  So, in family history we have the responsibility to “trust but verify.”

And special thanks to my colleague, Phyllis Scroggins, who found these two announcements and brought them to my attention.  While reading the microfilm newspapers, Phyllis manages to find the most interesting information.
Posted by Mike Brubaker, Executive Director at 7:09 AM No comments:

Edward and Lillian Cox and Their Young Family

Here, in about 1909, is a young, supposedly happy family.  You really can’t tell because there are very few smiles on these five people.  But, the lack of smiles may be a result of sitting for the camera.  In 1909, photos were somewhat pricey and you wanted to get the image as quickly and as inexpensively as possible.  So, “don’t smile and ruin the picture.”  This is Edward Cox, Jr, his wife Lillian and three of their children.  We can pretty closely date the photo because baby Edward was born in 1908 and died in a fire in 1911. 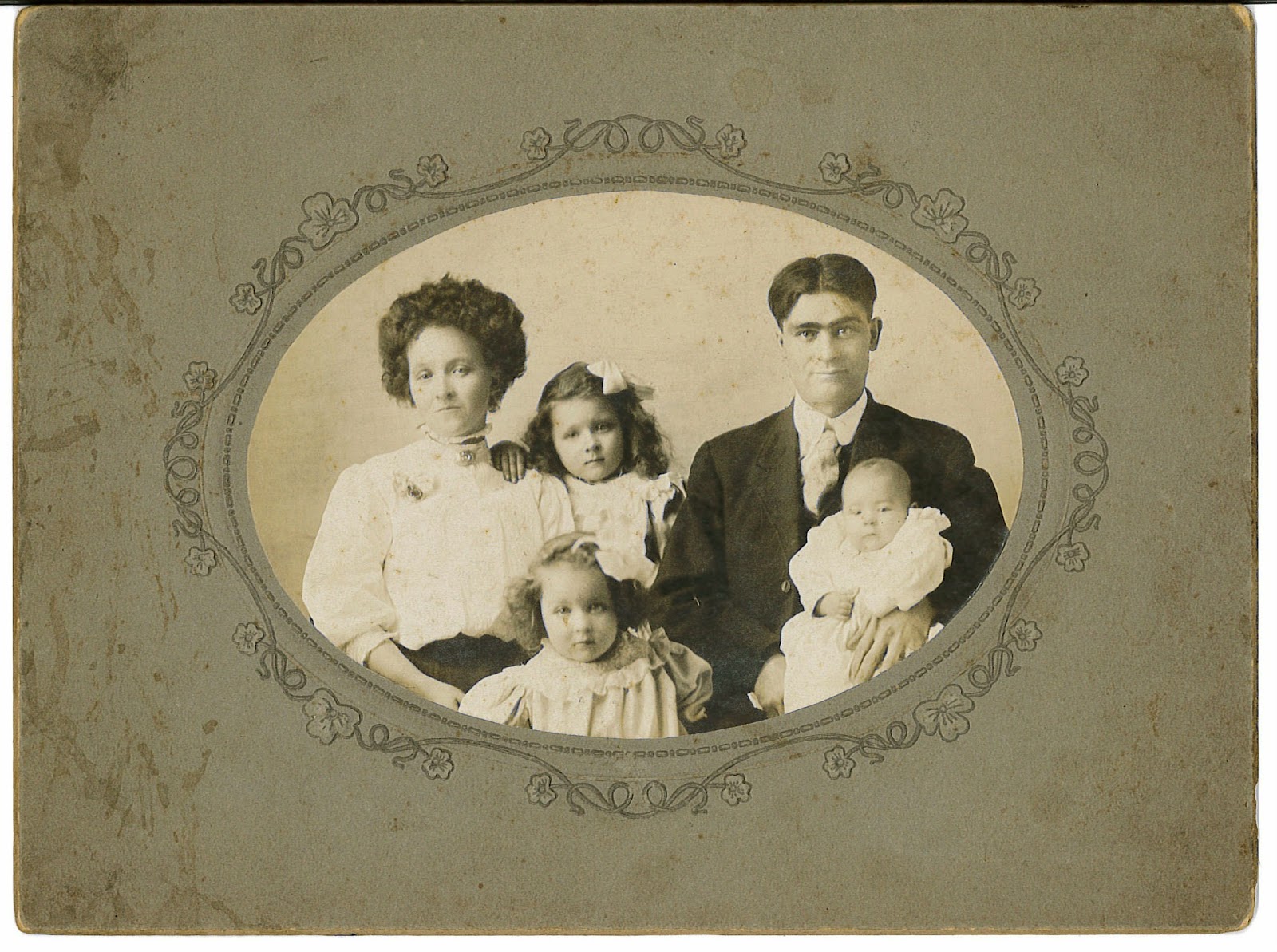 The styles in clothing also give some hints to dating the photo.  More importantly, it says something that the Cox family gave close attention to style.  They appear to be a young, hardworking family destined to enter the middle class of the United States. Edward is up to date with his style of ties, with the half Windsor knot, or possibly a four-in-hand knot.  Mrs. Cox is also keyed into Edwardian style dress with the high collar blouse with the broach pinned in the middle of the throat.  The large bows in the hair of both girls is also an interesting feature.  Although the debate about chronology is still going on, some would suggest that large bows in young girl’s hair was a feature of the late 1890s and early 1900s.

By looking at the fashions and knowing the history of this family, we have an interesting photo here that gives a fore shadowing of the tragedy to young baby “Eddie.”  It also suggests the fashion consciousness of a young, upwardly mobile family living in Becker, MN in 1909.

This photo is from the Sherburne History Center collection, 1992.030.059
Posted by Mike Brubaker, Executive Director at 7:37 AM No comments:

On Trial in Becker

In a trial in Becker in 1895, an interesting bit of local law proceedings were reported in the Sherburne County Star News: Thomas Parento accused Fred Specovious of stealing hay valued at eight dollars.  After two hours of testimony and five hours of jury deliberation, no conclusion was reached.  We had a “hung jury.”  The local magistrate, Judge Shephardson suggested that if the two parties could settle on the matter, jury costs would be reduced.  At this point, the court costs amounted to $20.  A cost of more than twice the value of the missing hay.  Parento and Specovious agreed to drop the case and split a $7 fee for court costs.


I am not sure if this reveals the wisdom of the court, or the two farmers saw the economic advantages to a settlement.   Regardless of the underlying “moral of the story,” the report does highlight the pragmatic approach often displayed in the court room in small towns in the Midwest.
Posted by Mike Brubaker, Executive Director at 8:21 AM No comments:

An Interesting Bit of Boosterism in Elk Rive

“One trouble with Elk River,” exclaimed one of our citizens, “is that we are too quiet, we don’t blow enough about the town and its advantages.”  The Sherburne County Star News published this comment on 12 September 1895.  It served to introduce a number of columns promoting the value of land and living in Elk River.  The publication in the pages of the local newspaper is an interesting bit of boosterism.

The articles something akin to “preaching to the choir.”  Although, the newspaper will reach areas outside of Elk River, the bulk of the membership already knows about the “value of land” in the area.   Yet, the paper goes on to promote Elk River land and living:

“Many of our business men are possessing themselves of small tracts of land convenient to town, as they are offered for sale,” the paper reported.  “This does not mean, necessarily, that they contemplate abandoning the business they are engaged in and go to farming for a living, but they recognize the fact that land at present prices is an excellent investment and they want some of it.”

In another column, the newspaper asks and answers: “What better place is there on earth to secure a home than right here adjacent to Elk River?” The column goes on to list so many advantages of: “an intelligent community of nice people, goo schools, religious influences, good markets, convenience to large cities, and beautiful surroundings.”

Promoting Elk River and efforts to increase the population are not unusual or unique to the city.  Small communities throughout the state of Minnesota are working to attract new settlers.  In 1895, Elk River is a small community with about 1300 people.  The entire county, however, is just beginning a growth spurt.  The county population in 1890 is about 5900, by 1900 the county has grown to 7200, and by 1910 the population is at 8100.  The promotion and boosterism is slowly paying off.
Posted by Mike Brubaker, Executive Director at 8:25 AM No comments: