April is fast approaching, that mean spring training ends and Major League Baseball begins.  Although Sherburne County has never fielded a professional or semi-professional ball club, baseball was taken very seriously in the county.  Just a sampling of news reports in 1895 reveals several of the baseball clubs in Sherburne County and the serious nature of the sport.

In June of 1895, with the start of the local season, the Sherburne County Star News presented a brief history of the rivalries in the area.  Elk River and Monticello ball clubs long remained top of the list of serious rivals.  “In olden times there used to be some battles royal between the base ballists of these two towns,” the newspaper reported.  “”Monday reminded us a little of those old times, the chief difference being that Elk River was defeated this time which didn’t used to be the case.”  In this particular “battle royal” Elk River fell to Monticello by a score of 20 to 15.
Reports throughout the summer covered ball clubs from Elk River, Monticello, Princeton, Becker, and Orrock.  The newspaper also covered match games between the “regulars of Elk River” and a scrub nine.  The paper reported in late July a tense rivalry between the two teams.  “The game was for blood from the start, though the scrubs hardly got their hands in the first two innings, during which the other fellows go a start of ten scores.”

The news reports continued through September, before the season came to an end.  Just like the major leagues, with the cooling weather and the falling leaves, baseball came to an end.  The cry from the teams echoed a long held sentiment, “just wait ‘til next year” when the games continue.

Posted by Mike Brubaker, Executive Director at 12:30 PM No comments:

Construction of Highway 10 in Elk River used “one of the biggest and latest improved concrete mixers and pavers in the state and it has the capacity of paving 600 feet a day,” the Sherburne County Star News reported.  Although small compared to modern equipment, the newspaper claimed the machines inspired crowds to gather each day and observe the work.

Credit for Highway 10 and the benefits received by Sherburne County goes to the hard work of Highway Commissioner Charles Babcock.  Known as the “father of the Minnesota Highway system,” Babcock worked diligently to see that his native Sherburne County received significant benefits of the road system.

With completion of the road through Elk River, the Star News summarized the benefits from the construction.  The newspaper claimed $425,000 had been spent on the project.  A census taken shortly after the highway opened showed in a one week span 10,000 automobiles traveled through Elk River.  The traffic numbers remain impressive in comparison to the number of automobiles, 849, in the county.

Highway 10 through Sherburne County significantly increased growth potential. The construction technology seems small.  Yet, the benefits to Sherburne County were immediate and they continue to roll through the county.
Posted by Mike Brubaker, Executive Director at 1:27 PM No comments:

Women Accepted for Volunteer Emergency Services, the WAVES of World War Two, became an elite group of 81,000 women enlisted in the United States Navy in 1944 and 1945.  Minnesota had its share of WAVES.  Even closer to home, Frances Beck of Sherburne County served as a WAVE in a military specialty so top secret she couldn’t speak of it until 50 years after the war.  Francis Beck served as a code breaker against the Japanese.

In the early 1940s Beck felt a passionate desire to serve.   She wanted to volunteer and do her part in the war effort, the navy, however, actively opposed women joining the service.  Finally, in 1944 Beck and 81,000 other women became WAVES.  “When I enlisted they said, “’Well you’re going to be in there until the war is over.’  I told them, ‘Well it can’t go on forever,” she recalled.

The duration of Beck’s service lasted slightly longer than a year.  In that time she trained first at Hunter College in New York.  Hunter College was boot camp for the WAVES.  The Navy then sent Beck for a quick stay at Miami University in Oxford, Ohio.  While at Miami University she trained in cryptography, radio operation, and writing secret code. Her orders finally sent her to Bainbridge Island, Washington state to intercept coded messages from the Japanese.  She served there until the end of the war.

“Until a few years ago I wouldn’t have been able to tell you what I did when I was in the service,” she told reporters from the Sherburne County Star News.  “I was in a branch in which you had to be a second generation American before they would even put you in there.  Then when we were discharged we were told we could not disclose what we had done while we were in the service.”


Francis Beck served as an elite member of a very small contingent of women in World War Two.  Only 81,000 young women could ever claim service in the WAVES.  A young lady from Sherburne County, truly unique to the community.
Posted by Mike Brubaker, Executive Director at 1:39 PM No comments: 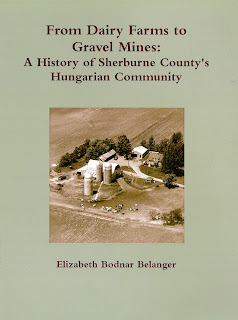 The introduction noted without her work “the stories and struggles” of these early settlers “would have faded into the past, leaving behind few traces.”  Although the statement may seem overly dramatic, it is accurate.  Without Betty Belanger, much about the Hungarian settlement in Elk River would have died.
Betty Belanger avoided branding the first arrival, or the latest, most vital of events.  Instead her history carefully cataloged the challenges facing early Hungarian immigrants.  She explored the role of the Church in the community.  She noted celebrations and families.   Then, beginning with the family of Rose Fazekas, Betty Belanger devoted individual chapters to many of the families settling in Elk River and Sherburne County.

Posted by Mike Brubaker, Executive Director at 9:00 AM No comments: