Electricity in Sherburne County generates a variety of unique stories about living and growing up in the county.  Providing electricity to the entire county stretched, in time, for over forty years.  Electrical power first arrived in Elk River in 1917.  In other areas, isolated farms, in the county, electricity came available in the 1950s.  Stories of electricity and the times before electrical power provide a unique perspective on life in Sherburne County.  The edited oral history of Angela Goenner. of Clear Lake, is one of these unique stories.

Born in Nebraksa, Angela (Eikmeier) Goenner found her way to Minnesota as a child.  Her parents operated a general store in Stearns County before moving to Sherburne County.  Angela married Ernest Goenner in 1933.  She lived on the family farm, in Clear lake, until her death in 2001.  She remembers her family getting electricity in 1948.

I can remember a lot about what it was like before electricity, I'll tell you.  The icebox with a little pan underneath for the water that you had to drain every so often.  We were lucky to have the ice because we lived right next to a lake here, you know.  We made our own ice.
The first thing we got was an electric refrigerator.  That was my prime thing that I wanted was a good electric refrigerator because I was sick and tired of dumping that water all the time for keeping things.  It kept things so much cleaner and also cooler.  It was so much more handy.  We put a motor on the cream separators so we could run that by electricity.  Then we had lights in the barn and lights in the house.  Before that our lights were Coleman gas lamps, gas lanterns.  The boys used lanterns out in the barn and we had what they call the gas lantern.  I don't know if you have any idea what they are like?  It was so nice just to be able to flick that little thing over there and get the lights in the house.  It was really, really wonderful.  Then, the ironing.  I got a nice electric iron.  Before that I had a gas iron.  I don't know if you remember what they were like.  They were an iron with a little bulb on the end of it that you put gasoline in.  It had to be white gas, you know, real good gasoline.  Then, you pumped the pressure in there, and then that would force the thing, and you lit it, and then that would keep the iron hot, and you could iron with it—rather than wait till bread baking day so you could get your irons hot on the stove.  We used to do it that way.  We had irons that you heated on the stove and did the ironing with that.  Then when I got that little gas iron, oh, I thought I was in seventh heaven, you know, because that worked so slick.  You could keep right on going.  But then when the electricity came along, all you had to do was just plug that thing in and it was hot.
The irons themselves were much lighter to handle back and forth as compared to those chunks of iron that you had that you put the little handle in, on the stove.  I can remember doing the ironing with those, and back and forth to the stove, get another fresh iron, come over here and iron some more.  Then when that gets too cold, you take it back, and set it on the stove, and take another one.  You had a set of three, with three you could pretty well go along with it.  And you could always kind of plan your ironing around the day when you baked bread, because you had to have the stove hot anyhow to get the oven warm enough to bake the bread.  That was just a good day to keep the irons hot on the stove.  You had to kind of compromise with a lot of those things, especially in the summertime.  In the wintertime, the stove was lit all the time.  In the summertime, you didn't light the big stove because a lot of times it got too hot from that big wood stove.  We had little kerosene stoves that we used, but you couldn't put the irons on those, and bread baking was still done with the wood stove.  One day a week, you always had to light that big wood stove and bake bread and iron.

Posted by Mike Brubaker, Executive Director at 12:35 PM No comments: 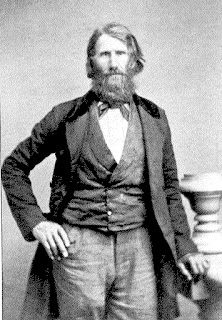 Early in the 1850’s, probably 1851, Ard Godfrey and James Jameson arrived in Sherburne County, at the convergence of the Elk and Mississippi Rivers.  An experienced millwright from Maine, Godfrey recognized the particular course of the Elk River offered a potential mill site. Godfrey set about obtaining the land and building a mill.  His efforts marked the creation of Elk River as an industrial site and settlement.

Godfrey, born in 1813,  grew up in Maine and following his father, he worked in the mills and gained some experience in the industry.  Although he married in 1838, he resisted settling in a community and wandered the United States seeking business opportunities.  Ard Godfrey left Maine, landing in Savannah, Georgia and then later, reversed course and traveled to St. Anthony Falls (later known as Minneapolis).  With each excursion, he left his wife to raise children.  He arrived in St. Anthony Falls in 1848, liquidated all of his assets around the country to build a family home in what became Minneapolis.  Three years later, Godfrey left his family to explore the Elk River for opportunity.

Godfrey and Jameson purchased land from Silas Lane on the mouth of the Elk River.  Lane, in 1851, was reportedly the only farmer in the area, although several trading posts had been established along the Elk and Mississippi rivers.  After the transfer of ownership, Godfrey began construction of a dam on the Elk River with plans for a mill.

For at least the next four years, Godfrey worked to improve his property in Elk River.  He built a small sawmill, and later added a grist mill to his industrial plant.  He also built a store, and a bridge across the Elk River to provide easy access to his operation.  He also owned a farm, north of his mill operation.

In spite of his hard work, Godfrey felt the urge to wander and seek his fortune elsewhere.  By 1855, he owned a fully operational mill on the river.  He helped plat the community of Orono, later known as Upper Town when it merged with the community of Elk River.  Yet, he sold it all.  By 1862, Godfrey left the mill town of Orono, apparently seeking investments in the Montana gold fields, exploring the potential for quartz mills to process the gold ore.

His work to develop mills in Montana proved less than profitable.  After his wandering, Godfrey returned to Minneapolis.  He continued to work in the mills around the community.  He remained in the city, where he died in 1894.

After seeking his fortune throughout the country, Ard Godfrey finally settled in Minneapolis.  Years of seeking his fortune led him through Sherburne County and elsewhere through the United States.  His investment in Elk River set the stage for a strong industrial base in the community.  Although he does not typify the image of Sherburne County settlers, his few years in the area significantly impacted the economy and the character of the community.

Posted by Mike Brubaker, Executive Director at 9:26 AM No comments:

With the lack of a graduation ceremony in 2020, we thought it appropriate to look back at another class of Elk River grads.  Men and women who put their lives on hold as the United states prepared to enter World War Two.  In three years, the world upon the class of 1938 to sacrifice for the war.   And the graduating class from Elk River answered the call.  Look closely on this image you may be able to pick out Jack Bade (second row, fourth from the right) and Charles Nagle (fourth row, second from left), both veterans from Elk River that served during the war (and men we have featured in these blog pages).  Other men and women on this photo collection may also have service records worth noting. 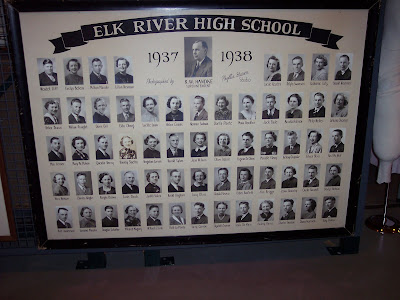 Posted by Mike Brubaker, Executive Director at 1:37 PM No comments:

Over the past few years, some blog entries seemed so much fun to research and write.  I wanted to take a moment and share one of these entertaining posts.  This post was originally published July of 2011.

Out west, tradition held that stealing a man’s horse was the most despicable and life-threatening action imaginable.  A horse thief was usually hanged without the benefit of a jury trial.

I recently came across the following article in the Sauk Rapids Frontierman on 7 June 1855:

The meanest and most contemptible action we know of, is for a white man to steal a canoe.  It is a common occurrence, for some people who are going to the Falls or St. Paul, and who are either too stingy or mean to pay for a passage down by land or purchase a canoe, to steal the first one they chance to see.  The people residing upon the river have lost a large number during the past two years, and we have lately been made a victim by one of this class of detestable beings—canoe stealers.  It may seem cunning, and be a cheap way to go down stream, but if we ever find out the thief, he will learn to his satisfaction that “Jordan am a hard road to travel.”

I wonder if the editor considered hanging too good for any of these canoe thieves: