Fire is always a frightening threat in Minnesota.   The Hinckley Fire in 1894 and the Cloquet Fire in 1918 devastated land and destroyed lives in North Central Minnesota.  Just these two fires killed nearly 1000 people and caused property losses in the millions of dollars.

Fire also threatened small, isolated farms throughout Minnesota.  The newspaper columns carried numbers of reports on devastating farm fires.  April 1895, Sherburne County newspapers reported a significant fire at the farm of Chris Leider, Livonia Township.  “His house and nearly all of its contents,” were destroyed by fire.  “A granary and about 300 bushels of wheat which was kept over from the crop of three years ago were also destroyed.  The insurance had just run out, and as a consequence the loss is total.”  A few months later fire destroyed a second Livonia farm site.  The newspapers printed the terrible final news “no insurance.”

Unfortunately, the reports around the county reveal fire as the enemy of communities as well as the farmers.  1895 fire destroyed three buildings in Clearwater.  The post office occupied one of the buildings consumed.  Not as devastating as the Cloquet or the Hinckley fires, Elk River business district was incinerated in the summer of 1915.

Until the 1920s, reports of fire take up pages of news print. Fire threatened every individual in Minnesota, during the early days of settlement.  Up until the installation of modern equipment, no community felt safe from the devastation that enveloped Hinckley and Cloquet, and very nearly destroyed Elk River. 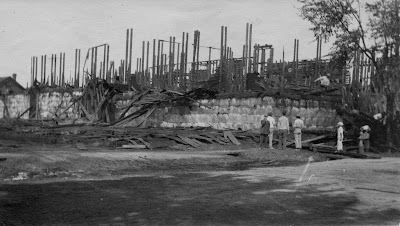 This photo is the burned out skeleton of the Elk River Ice House, dated around 1910.
Posted by Mike Brubaker, Executive Director at 8:00 AM No comments:

No News--Blame It On The Reporter

Commentary on the news coverage in Becker, published in the Sherburne County Star News, 6 August 1896:
Miss Grace, looking over our shoulder, remarked, “I know why all your items don’t appear.  The editor can’t read your writing.”
An interesting explanation in the columns of the Sherburne County Times 23 March, 1899.  I am not sure if this is the writing of a frustrated editor, or a need to fill space.
Newspaper men are blamed for a lot of things they can’t help, such as partiality in mentioning visitors, giving news about some folks and leaving others out, etc.  The newspaper man cannot help this.  He simple prints the news he can find.  Some people inform him about such things and others do not.—Ed.
An interesting perspective to contemplate as we search for news of our ancestors in the newspapers.  Maybe our kin are simply not that informative.
Posted by Mike Brubaker, Executive Director at 7:56 AM No comments:

Memoirs: We All Need to Write Them

Memoirs and Biographies from Sherburne County provide fascinating reading.  If we all took pen and paper to record our memoirs, imagine the excitement we would generate.   Imagine the information and knowledge we could share with the world.  Two books, a memoir and edited letters provide examples of the great value of written, personal history.  Rod Hunt’s book A Boy’s Guide to Big Lake, Minnesota and Other Stuff and Herb and Corinne Murphy’s They Called Her Maria make the history come alive.
Rod Hunt describes fishing at the confluence of the Elk and St. Francis Rivers, you understand his hopes, desires, and prayers to catch a Northern Pike.  And, you dread reeling in the Rock Bass.  The nasty, gritty taste of a Rock Bass permeates your mouth as Hunt remembers “they are called Rock Bass because they taste like the bottom of a rock.”
Straight forward, serious history comes alive in the pages of Herb and Corinne Murphy’s book They Called Her Maria.  These are the edited letters and diaries of Hannah Maria Nutting Benham Knapp a woman whose circumstances forced her to travel the world.  She finally settled with her children in Sherburne County.  You feel her pain when she writes of life as a widow and single mother.  “When I look back to that dark period of my life, I wonder I was even carried through it.  Wonder how I ever came to be where I am now.”
A recent memoir to cross my desk is Robert Bystrom’s Savanna Sunsets Growing Up in Sand Country.  Like Rod Hunt’s memoir, Bystrom paints pictures that create for everyone a sense of life in the past.  As he wrote in his introduction, “Life on the farm was grueling.  It was mostly work and the work was dirty, smelly, sweaty and interminable.”  In spite of the pessimistic introduction, the memories seem special.  Chapters entitled “In the Outhouse” and “The Barn” provide even this urban refugee with a nostalgic sense of farm life in the 1930s and1940s.  When he describes battling bees in the barn, as every young boy will do, we all realize poking the hive and tormenting the bees will not end well.  Yet, we can all imagine the ensuing battle.
Writing memories and putting family life onto a page present some challenges.  Yet, these memoirs provide important details for future generations.  Recording memories and (to use the cliché) putting ink to paper is rewarding.  I would urge everyone to write their memories.  Whatever you write on the page, future generations will find value.  Record those memories and save history for the future.