Labor shortages, in World War Two the phrase commonly referred to necessary work in the factories and armament industry.  Often associated with Rosie the Riveter, the phrase suggested a shortage of workers to man the factories and build necessary war machines.  Yet, the phrase carried a tragic and not often considered meaning in Sherburne County.  Although the federal government exempted most farm workers from the draft and created programs to provide more farm workers, the area around Sherburne County witnessed a severe shortage of labor during the war years of 1943 to 1945.  These labor shortages in farming caused more than a few farm failures and forced auctions.

With the opening months of 1943, a new phase of the war developed.  The conclusion of the North Africa campaign signaled success for allied troops.  Plans for invasion of Italy continued.  And the offensive against japan showed measured success.  All of this demanded more war material.  Rationing and increased production placed greater stress on farming communities like Sherburne County.  Some farmers found it impossible to carry on their work.  In particular, farm workers seemed impossible to hire. 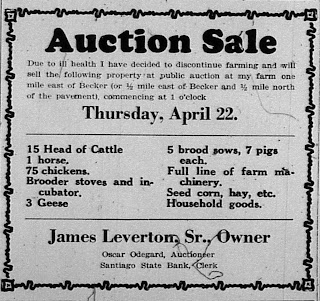 The federal government created programs to train teen age boys to work on the farms during summer months.  Still later, the government enlisted prisoners of war, from Italy and Germany, to work in the food processing plants and in some of the larger farms.  Yet, the programs fell short for Sherburne county farmers.  The Sherburne County Star News, in April 1943, reported on a program to train young men in the Twin Cities to work on farms throughout the state.  Other reports noted Italian POW’s working in the potato warehouse in Princeton.  Yet very few of the programs and workers made their way into Sherburne County.  The government efforts fell significantly short.

This inadequate effort led to farm failures and forced auction liquidations around Sherburne County.  Several advertisements for auctions appeared in the newspapers, beginning in 1943 and continuing into 1945.  Many of the ads explained the inability to find workers as the cause for the auctions.

Labor shortages remains an unusual phrase in exploring World War Two and farm production.  Yet, the newspaper columns during those years reveal a series of unfortunate farm failures as a result of labor shortages and the lack of manpower in the rural counties like Sherburne County.

Posted by Mike Brubaker, Executive Director at 8:12 AM