This past week Independent School District 728, the district encompassing Elk River, commemorated the 85 anniversary of the opening of the Elk River High School.  Rather than honor the building and its years of service, I thought it more important to explore the life of one truly dedicated and interesting educator: Robert Handke.
Hired as superintendent of the Elk River Schools in 1925, Robert Handke served for 30 some years as the leader of Elk River education.  Under his watch, Elk River High School, the current Handke Center housing community education, was built.  The brick monument of today replaced a smaller school described by the Elk River Star News as “a 50 year old frame building pitifully overcrowded and already waiting for fire and safety inspectors to declare it unsafe.” 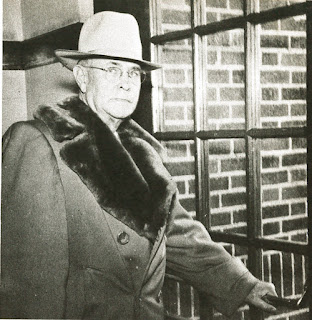 Elkhi Stadium, the location for the first organized hockey in Elk River, along with baseball and football were built in the same area.

Handke must have been a very dynamic and charismatic leader.  Only five years after he took the helm as superintendent, the new high school was open.  After 1931, a pet project for Handke was a school lunch program.  With this project, Handke revealed his truly forward thinking and imaginative philosophy in education.  In the early 1930s, school lunch programs were in the discussion stage at most school districts around the county.  Yet Handke built a kitchen and lunch room and developed gardening projects to provide fresh vegetables to students.  As economic need expanded, he opened up the school kitchens for use in community food programs to provide for entire families, not simply students.  With the coming of World War Two, the gardening program expanded to become a community wide victory garden.
Born in Kendallville, Iowa, he took a Bachelor’s Degree in Education from Upper Iowa University in Fayette, Iowa.  Later he earned a Master’s in Education from the University of Minnesota.   He came to Elk River from Brownton, MN in 1925.  In addition to his work as superintendent at Elk River, Handke taught physics in the High School.

After 32 years of service in Elk River, Robert Handke retired in 1957.  In his time leading the Elk River Schools, he left an indelible mark on the entire community.
Posted by Mike Brubaker, Executive Director at 1:27 PM No comments:

Newspapers serve as the first recorders of history.  Their content provides invaluable information.

A truly unique collection of newspapers published by the Becker Schools reside in the collections of the Sherburne History Center Library and Archives.  These papers provide unique insight into the community and the activities of the area.  Known simply as The Beacon, the collection of newspapers ranges from 1942 to 1944.  Publishing in the midst of the war, the reporters for the school paper took a very serious tone while they provided news of the schools and of the community.

An example of the serious tone of the paper, the front pages of the December 10, 1942 The Beacon reported the details of the draft registration scheduled for the week of December 18 to December 24, 1942.  The paper also reported on the scheduled blackout test on December 14.  “In Becker the fire bell will be rung at intervals of 5 seconds as a signal that the black out is beginning,” the paper reported.  “Twenty minutes later the fire bell will be rung continuously for two minutes to indicate that the black out is over.”

On a lighter note, local community gossip within the school and around Becker was also published.  From “Senior News” to the “Primary Grades” events were reported.  “We were pleasantly surprised on Friday when Phyllis brought two tiny turtles to school.  We all enjoy our new pets very much,” the primary grades reported.  While the senior news discussed the physics class explorations in fire and heat. 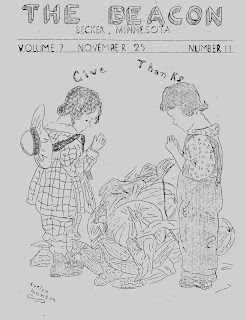 Although they are mimeographed copies of newspapers, the information contained on these pages show the unique personality of Becker, Minnesota in the midst of World War Two.  The local character of the pages provide insight that cannot be found anywhere else.

Posted by Mike Brubaker, Executive Director at 7:50 AM No comments:

Recently, drinking with friends, the topic of wolves in Sherburne County came up for discussion.  Someone had seen two wolves running through their cut fields in recent weeks (this would have been in the middle of December, 2015).  It inspired me to seek a few details about the wolf population in the County.

Reading the newspapers of 1900, particularly the Sherburne County Star News, there appears to be a very large population of wolves in the county.  The spring of 1900 the newspapers reported some success for the wolf hunters of Sherburne County.  In Blue Hill Township on May 10, 1900 the paper reported, “the wolf hunters are camped near Almond Thompson’s house and are doing good work.  Up to Saturday night they had secured 14 wolves.”  In the same newspaper, reporting outside of Elk River, “Eben and Elmer Ingersoll caught four young wolves one day last week.”

Clearly a large population of wolves lived in Sherburne County.  Unfortunately, they were regarded as a menace to farmers and ranchers.  And, the local population enthusiastically hunted the animals.  Another report published on August 9, 1900 by the Star News: “Sherburne county has sent 90 applications for wolf bounty to the state auditor.  The amount available with which to pay these claims was $5000, and as the appli9cations call for more than double this amount, nom more claims will be paid until another appropriation shall be made.”

Clearly, at one time a large population of wolves lived in Sherburne County.

Posted by Mike Brubaker, Executive Director at 9:06 AM No comments: