World War One and The Home guard in Sherburne County

The Minnesota Home Guard organized in 1917 after the state National Guard joined the regular army to fight World War One in Europe.  With the creation of the Home Guard, Elk River, for the only time in its history, became the headquarters of a military organization. Although the Home Guard receives little attention in the histories of the Minnesota war effort, they provided some significant service to the communities of Sherburne County as well as aid to the state.

The creation of the Minnesota Home Guard originated by the Minnesota Commission of Public Safety.  The state organized twenty-three battalions, consisting of over 7,000 men.  The Elk River unit became known as Company C of the 12th Battalion.  The first step in organizing Company C was the election officers.  County Attorney George H. Tyler received the rank of captain, while W. T. Parry and Herbert Imholte were named first and second lieutenants.  Following elections, an estimated 60 men from throughout the county, signed up to serve.

Enlistment in the guard required a minimum age of 26.  In addition, these men were unpaid volunteers unless called away for extended duty.  More often the men were called upon to aid in recruitment drives, bond sales, and disaster relief.

Company C served a vital role in helping fight fires and aid in recovery efforts in northeast Minnesota in the fall of 1918.  According to the Sherburne County Star News at least fifty members of the company quickly turned out to provide aid in the crisis.

“People who have been inclined to poke fun at members of the Home Guard of Elk River and Sherburne County have now changed their minds about the efficiency and usefulness of this organization,” the paper opined after the events about the fires and the actions of Company C became known.

Shortly after the fires in northeastern Minnesota, the war ended.  At the conclusion of the war in Europe, life in Sherburne County returned to a normal state of affairs.  The need for the Home Guard diminished and their function ceased by January 1921.  Although the company disbanded, their service and aid to the county remains a mark of pride for Sherburne County.
Posted by Mike Brubaker, Executive Director at 1:42 PM No comments:

April marks the century anniversary of United States involvement in World War One.  On April 6, 1917 Congress declared war against Germany, the Austro-Hungarian Empire and their allies. In the coming year, no doubt, a number of historians will commemorate the war activities of the United States.

For Sherburne County, the war began earlier than April 1917.  As part of the Minnesota National guard, in 1916, young men from Sherburne County served as border guards in Texas and New Mexico.  The escapades of Pancho Villa along the Mexico-Texas border led to the stationing of National guardsmen all along the border.  General John “Black Jack” Pershing commanded Minnesota Guardsmen ordered into national service in July 1916.  Some historians maintain the United States eventually would enter the European war.  The work on the Mexico border served as training for the European theater.

The Minnesota Guard served for less than a year in New Mexico before they returned home.  Almost immediately after their return to Sherburne County, the guardsmen were called into service in France.  Additionally, in 1917 and 1918, more than 100 young men received the draft call for service in World War I.  The war also impacted the home front, with rationing, Red Cross activities, and other programs to support the war.

Sherburne County entered World War One before the actual declaration of war in April 1917.  As the year 2017 progresses, we will commemorate and honor the county and the events during this traumatic period.
Posted by Mike Brubaker, Executive Director at 8:57 AM No comments:

Every so often we write of an individual significant to the history of Sherburne County.  Another name to add to the list of movers and shakers in Sherburne Ccounty is Sheriff Chet Goenner--ed. note.

“History will record that Sheriff Goenner solved all of the murders and bank robberies during his years in office.” The quote from the Sherburne County Star News, summarized the career of Sherburne County’s long serving sheriff. Chester Goenner served as County Sheriff from 1952 until 1981.  In the time, he earned a reputation of commanding respect and using all of his resources to get the job done.

Goenner was first appointed to the position of County Sheriff in 1952, after the death of Nial Nuemann.  Before that appointment, he served as the county deputy sheriff for 18 years.  Prior to that appointment, Goenner also worked as a bouncer for a Clear Lake liquor establishment. In total time, he served over 40 years in law enforcement.  County Treasurer Lois Riecken suggested he was naturally suited to the particular career. “Chet was a big person but used no force unless absolutely necessary,” she said.   He also commanded respect from everyone he served.

Using different technologies to provide service to everyone in Sherburne County summarizes the career of Sheriff Chester Goenner.  In the early years of service, no radios existed in the squad cars.  “He had to call the office on a telephone to get what calls had come in,” Loretta Moos, a part-time dispatcher remembered.

A particular story illustrating Goenner’s dedication to service concerns a missing 80 year old man who had wandered away from his home.  After a day of ground search with no results, Goenner enlisted the aid of a local pilot.  Early in the morning, Goenner and the pilot left the Monticello airport and began searching the area by air.  In less than one hour time, Goenner located the man and radioed his position to ground searchers.

Every two years, Goenner won re-election as the County Sheriff until he died in 1981.  The Sheriff “made people feel important, he treated people with respect,” Lois Riecken said.  Because he could command respect he served as sheriff without wearing a gun or uniform, she said.

After Goenner’s death, a memorial was placed in the front of the Sherburne County Government Center.  The opening sentence described Chester J. Goenner: “A man of integrity who served all mankind impartially with fairness, compassion and dignity.”
Posted by Mike Brubaker, Executive Director at 12:52 PM No comments:

Thank You For Your Service 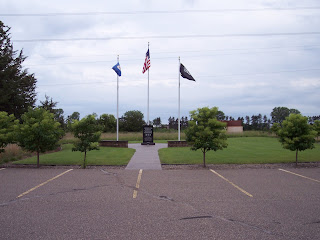 This morning, 4 February 2017, I raised the flags at the Veterans’ Memorial at the Sherburne History Center.  As I finished, a wave of pride came over me.  This is a beautiful monument to honor so many men and women who served in the military.  Today is no different from any other day.  No special occasion, just Saturday February 4.  But today I feel the need to say to the men and women currently protecting us, and to everyone who served in the military: “Thank you for your sacrifice.”

Posted by Mike Brubaker, Executive Director at 6:49 AM No comments:

Entertainment and technology took a great stride forward in Elk River in 1913 when motion pictures and movie theaters illuminated the city.  In that year two theaters, “The Elk Theater” and “Blanchett’s”, presented silent movies in Elk River.  By 1915, a third theater, the “Royal Theater,” opened its doors.  These years marked the beginning of a new age in entertainment in Elk River.

In November of 1913, the Elk Theater advertised the silent short movie “Return of Crime,” dramatic crime and punishment movie featuring the young British actress Barbara Tennant.  By 1914, the Elk presented full length silent movies such as “The Last Days of Pompeii.”  Admission prices to the hour long movie was 15 and 25 cents, the matinee appeared to be a less expensive ticket than the evening showing.

Meanwhile, the Sherburne County Star News reported “Blanchett’s” presented motion pictures.  Although the newspaper failed to note the movie shown, the reporter noted “the pictures were clear, distinct and drew a packed house.”

The Royal Theater, the third theater in Elk River, opened its doors in November 1915.  Promising “something new every night,” the Royal presented a matinee at 2:30 in the afternoon, and a 7:30 evening show.  “We are showing some high class pictures,” the advertising promised.  The opening night premiered the movie, “The Shadows of a Great City,” a silent movie first created as a play, and later a British silent movie before the American version release in 1915.

Like so many businesses the movie houses of Elk River struggled to gain a solid base.  The surviving theater, the Elk Theater, continued to present motion pictures into the 1940s and on.  Providing entertainment to Sherburne County residents for several decades.

Posted by Mike Brubaker, Executive Director at 1:18 PM No comments: