With the coming harvest season, I am reminded of the practices for preserving food during World War Two.  In 1943, with the war going full blast, every family tried to raise food in their own “victory gardens.”  The produce of these gardens seemed so abundant questions developed on how to best preserve the extra food.  In Elk River a unique program developed to provide canning services to any family in need of the service.

In June 1943, the Elk River newspaper announced the high school acquired a canning unit capable of processing 500 quarts per day.  With the aid of supervisors, anyone needing access to the canning unit might preserve any food grown in their victory gardens.  The unit canned in glass or tin cans.  If the family used tin cans, they would be charged two cents per can. 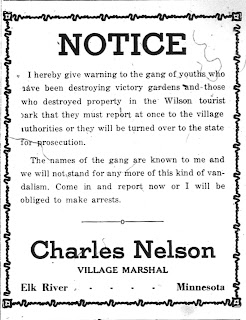 “All are welcome to come in and can,” School Superintendent Robert Handke said.  He anticipated high demand for the unit, he encouraged residents to contact the school to reserve time for the operation.


The only shortcoming of the program concerned vandalism of victory gardens.  In July, the Village Marshall posted an ad in the Elk River newspapers.  He knew of several vandals destroying victory gardens.  He wanted to give them an opportunity to turn themselves in before he turned these cases over to the state for prosecution.  The Marshall’s tactics apparently succeeded, as the vandalism stopped, and the Elk River canning unit preserved a bumper crop of garden produce.

The canning units in Elk River serve as another example of the attitude of complete cooperation during World War Two.

Posted by Mike Brubaker, Executive Director at 12:04 PM No comments:

Remembering Weather in the 1930s

In the years 1933 and 1934, the county suffered a major drought.  Farmers remembered the time as a “dust bowl.”  Some residents of Sherburne County remember this time as an end to farming in some areas of the county.  “The light, worn out soils took to the air and drifted like snow over the roads and onto front porches,” is the way historian Herb Murphy described it.  Some folklore of the times described Orrock Township as the “poison ivy capital of the world.”  Other tall tales suggested that “jack rabbits, when passing through Orrock Township, had to pack a lunch because there was nothing to eat.”

A variety of conservation efforts restored the area of Orrock Township.  Conservation groups planted trees and slowly brought back the land.  The bulk of the township became the Sherburne Wildlife Refuge and the Sand Dunes State Forest.  All of this resulting from the catastrophic drought conditions in the 1930s.  Worse than the weather of 2021, yet events important to remember.

Posted by Mike Brubaker, Executive Director at 8:59 AM No comments:

German Prisoners of War Work the Farms in Minnesota

Prisoners of War in Minnesota during World War Two often worked the lumber mills and the farms in the northern and central parts of the state.  Although not often seen in Sherburne County, POWs worked the potato harvest in Princeton in 1943, and possibly again in 1944.  At times, residents of Elk River and eastern Sherburne County witnessed these POWs being transported or working the potato fields.

The casual sighting of POWs in Elk River, like other small towns in Minnesota, generated a certain amount of excitement witnessed in family letters such as the letter from H. C. Byson to his daughter Dawn Byson (later Moyer), in the summer of 1944.  Byson wrote to his daughter:

Bruce came home this morning from downtown with those expressive eyes of his telling us an exciting story.  He and several other people watched German prisoners eat and then be loaded into trucks and hauled toward the city.  Bruce said that there was a guard at each table and as the prisoners came marching out one told the group in broken English that they were captured in Africa and had worked on farms there for a few months before being brought to this country.  Some of them were still wearing their German uniforms two of which Bruce thought were officers because of the caps and ornaments that were on their clothes, straps, and pockets.

This letter from the Byson family serves as another bit of evidence documenting the activities of German and Italian prisoners of war in Central Minnesota.  With an estimated 426,000 POWs in the United States during World War Two, only a small number of these men found their way to Minnesota to work in the lumber camps and the farms of Central Minnesota.  In small towns, such as Elk River, their temporary and brief presence created an exciting stir within the community.

Posted by Mike Brubaker, Executive Director at 10:06 AM No comments: