Citizens may celebrate the birthday of Sherburne County, 163 years strong, on Monday 25 February.  Looking back on the original promotion and emigrant recruitment for the county reveals a very proud group of settlers.

The Saint Paul Pioneer Press newspaper published an unsigned letter from an early settler of Sherburne County.  “At Elk River Station,” an 1868 letter writer suggested, “prosperity is at this time manifest.  A steam saw mill with the usual attachments for furnishing building material, is being built and will soon be in operation.  A new school house to cost two thousand dollars, is to be erected the present season.”

The letter went on to describe a “people free from all bigotry and have no great partiality for any particular sect.”  The residents of Sherburne County supported education for their children and nearly guaranteed a dramatic growth in population.  Priced between four and eight dollars an acre, promoters promised land guaranteed to provide ample crops.

As part of the efforts to promote Elk River and Sherburne County, a second letter described Elk river as “growing rapidly.”  The city housed “two first class hotels, at reasonable rates for both day and week board.”  From Elk River, “hundreds of men are to be seen daily, on their way to the pineries on Rum River and the Upper Mississippi.”

After the legislative birth of Sherburne County, promoters of the community quickly developed a program to sell the county as new and exciting opportunity.  163 years later, Sherburne County continues to deliver exciting and new opportunities.

Posted by Mike Brubaker, Executive Director at 2:48 PM No comments: 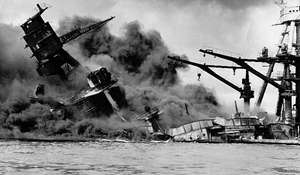 Actually stationed at Ewa Field, near Pearl Harbor, Marine Air Corps mechanic Charles Nogle witnessed and survived the attack on Hawaii.  A 1989 newspaper article published Nogle reminiscences about the day.  “At the time of the attack, I was a crew member on a DC-5 that out on the field.  We had two of them, and on December 7, one of the was in the overhaul hanger at Ford Island,” he said.  “Ironically, it was the only hanger building on Ford Island that was not hit, and that old bird never got a scratch on it.”

Nogle explained at the time of the attack he was caught wearing nothing but a towel, preparing to shower and head for liberty in Honolulu.  In the chaos that ensued, an officer ordered him to get dressed before joining the fight to protect Pearl Harbor.  He also remembered an anticipated invasion generated significant tension the following days.  An attack that never arrived.

To conclude the update: Charlie Nogle served throughout the war and returned home.  Elk River remained a residence for only a brief time after his return.

Posted by Mike Brubaker, Executive Director at 1:04 PM No comments:

In Consideration of Barns

A recent facebook post from the Stearns County History Center noted a variety of explanations for round barn architecture.  Although I am not too thoughtful, the article caused me to wonder the different why’s of barn construction.  Why are they round?  Why paint a barn red, or white?  What are the motives of a house barn? 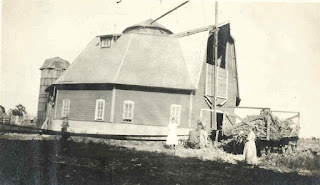 According to the Stearns County post, folklore suggested round barns were built so the devil could not hide in the corners.  More practically, round barns better withstood high winds, tornadoes, and other natural disasters.  In the end, technology eroded the popularity of round barns.  Loading silos and feeding cattle in a round barn proved more difficult than using a rectangular barn.  And, the expense of construction also discouraged the unique architecture of a round barn.

Economics also determined the color of a barn.  Several farmers suggested to me they painted barns red or white depending on the price of paint.  Still others mention that a homemade mixture of skimmed milk, lime, and red iron oxide created a long lasting, red tinted paint.  In addition, red barns may be warmer than white barns or unpainted barns.  The red hue absorbs heat in the winter time and makes for a warmer interior for the farm animals.

Heat from the animals also plays a role in the construction of house barns.  Ole Rolvaag discussed house barn construction in his classic work, Giants of the Earth.  In his novel, Rolvaag makes clear, the heat generated by farm animals creates a more comfortable environment for a family sharing the same building.  Farmers utilized the house barn architecture for centuries in both Europe and the United States.

As the Stearns County post suggests, barn construction is complex and at time very personal.  Yet the history of barn architecture provides significant consideration.

Posted by Mike Brubaker, Executive Director at 11:58 AM No comments: