"Talkies" Make It To Elk River

Transitioning from silent movies to “talkies” challenged any number of local movie theaters in the United States.  Elk River held a unique position in entertainment history as the local newspaper documented and criticized the efforts to introduce sound motion pictures to Sherburne County.

The manager of the Elk Theatre announced plans to introduce “talkies” in the spring of 1930.  Referred to as “Manager Kizer,” the Sherburne County Star News reported the theater manager would close entertainment spot in February.  After two weeks of redecorating and remodeling, “talkies” would entertain the Sherburne County public.  The theater set a goal of February 22, 1930 to introduce the new technology.  Kizer missed his deadline and opened in March.

The technology to the new motion pictures “gives the very best of sound picture effects,” Kizer promised.  And, with much fanfare and advertising, the first motion picture with sound in Elk River offered two different selections.  The grand opening featured a musical, “Words and Music.”  A midweek offering featured Will Rogers in the movie “They Had To See Paris.”  Unfortunately, reviews of the “talkies” suggested the sound from the films was an inferior form of entertainment.  The newspaper noted a “rasping and echoing which bothered a great deal.”  Kizer and the newspaper speculated the theater needed some renovations to improve acoustics.  The Elk Theatre discontinued “talkies” until the sound issues could be resolved.

After some renovation work, motion pictures with sound reappeared in the Elk Theatre in September of 1930.  The reintroduction of sound featured a well known movie, “The Sophomore” starring Eddie Quillen and Sally O’Neil. The Star News reported a much improved sound system with the theater renovations.

The newspaper failed to review the improvements to the theater.  But, the hard work of Kizer must have paid off.  The theater continued to show “talkies” while the silent motion pictures ended in Elk River.
Posted by Mike Brubaker, Executive Director at 1:07 PM No comments: 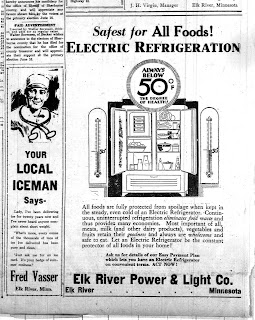 We found these two advertisements side-by-side in the Elk River Star News.  It struck us as interesting that it highlights the challenges of jobs versus new technologies.  The ad ran in May 1, 1930 issue of the newspaper.
Posted by Mike Brubaker, Executive Director at 1:15 PM No comments:

Jack A. Bade was born in 1920 in Minneapolis.  His family moved to Elk River when he was still an infant.  He grew up in Elk River.  In high school he played football and basketball, and had the lead in the school play, Robin Hood.  After he graduated in 1938, he attended the University of Minnesota majoring in engineering.   For a time he worked at Honeywell Corporation before enlisting in the Army Air Corps.

He received his commission and flight wings at Luke Airfield on July 26, 1942.  He then joined the 44th fighter squadron of the 18th Fighter group in the Pacific theater in December.
During his service in the Pacific theater in 1943, he earned the unique title of flying ace.  From January through September of 1943 Lt. Jack Bade was credited with destroying 5 enemy aircraft with one more probable.  Lt. Bade earned a Distinguished Service Cross for heroism on 13 February 1943.  In the citation Bade is credited with heroism while piloting a P-40 fighter to protect bombers from Japanese Zeros.  At one point, the citation notes, “Undeterred by complete lack of fire power and suffering great pain, he put his damaged plane through a series of headlong passes with such formidable aggressiveness that the Japanese airmen broke off their fight and fled.” He was reassigned to the home front in September of 1943.  For the remainder of the war he served as a flight instructor.  At the end of the conflict he worked as a test pilot for Republic Aviation.  He was killed in a test flight on May 2, 1963.

World War II clearly brought out courage and the best in many men and women from Sherburne County, if not throughout the United States. Jack Bade is just one example of these men and women referred to as “the greatest generation” and certainly warrant attention on any list of “profiles in courage.”

Posted by Mike Brubaker, Executive Director at 1:40 PM No comments:

During World War One, the United States first recognized gold star families, families who lost a member during war time.  In Sherburne County, the only gold star family in the area of Big Lake came with the death of Arthur Embretson in 1918.

Serving aboard the U.S.S. Cyclops, Embretson was one of 306 sailors lost when the ship sank in March 1918.  Because of failed radio transmissions, the exact location of the ship was lost for many years.  The ship could have been captured or sunk as it sailed along the North Carolina coast.  The exact cause of the sinking remained inconclusive, although maritime experts believe the Cyclops had been overloaded and storms in the Atlantic Ocean caused the ship to founder or break apart.  The sinking of the Cyclops remains the single largest loss of life aboard a United states naval ship not directly involved in combat.
Before he enlisted in the navy in 1917, Arthur Bernard Embretson left a small mark in history.  Born in October 1888 to Ole and Marie Embretson in Orrock Township.  He apparently lived on the family farm until his naval service.  In the Navy he attained the rank of fireman, third class. 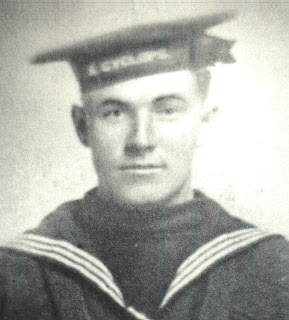 Very little is written about Arthur Embretson.  During his service, the Sherburne County Star News published three reports from letters Embretson sent home.  In July 1917, he sent his photograph, in uniform, to friends reminding them to write often.  The January 18, 1918 issue of the newspaper, his letter sent thanks for the Red Cross Christmas package.  “I sure did appreciate it and am glad to see the old friends and neighbors remember me,” he wrote.  By April, 1918, the Navy declared the U.S.S. Cyclops missing.  On June 1, 1918 the ship was declared lost and all hands aboard as deceased.

Because Arthur Embretson died at sea, his remains were never recovered.  A memorial stone in Orrock Cemetery marks the life and death of Arthur Bernard Embretson, the only resident of Orrock and big Lake Townships to give his life in the service of the United States in World War One.

Posted by Mike Brubaker, Executive Director at 9:00 AM No comments: