Very little to do with Sherburne County History, however, today, 15 January 1919 remains a day to be forever remembered.  In Boston, Mass. on this date, 21 people died in the Great Molasses Flood.

Today, in history, a tank holding over two million gallons of molasses broke open, flooding the nearby streets of Boston.  A wall of sugary liquid, 25 feet high moved down the streets, killing humans and animals in its wake.  Witnesses testified as horses struggled against the molasses, they were slowly sucked down into a slow, strangulating death.  After the wake subsided, a river of molasses, three feet deep worked its way down to the harbor.


After an investigation, faulty construction of the holding tank received the blame for the disaster.  Reports held the tank, when brand new, had so many leaks along the seams the manufacturers painted the tank brown to hide the faults. Witnesses testified the rivets popping from the tank sounded like machine gun fire as the huge steel drum failed.

A slight resemblance to clean-up required several weeks to complete.  For several months, the sticky evidence of molasses remained in the streets.  More than 100 years later, residences in the Boston neighborhood still report the occasional smells of molasses, when the air breeze is just right.

Posted by Mike Brubaker, Executive Director at 8:12 AM No comments:

The Old and The New Featured on Postcards 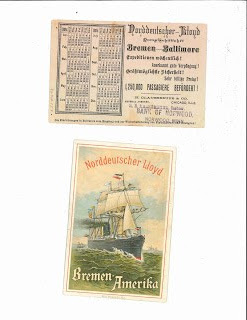 With the coming New Year, I wanted to share a unique item within our collection.  This calendar postcard from the Norddeutscher Lloyd Passenger Lines immediately came to mind.  This postcard highlights a ship traveling from Bremen to Baltimore with the calendar date of 1884.

By this date the shipping firm had been in business for more than 25 years.  From 1857 until 1970 the Norddeutscher Lloyd shipping company hauled passengers and goods between Germany and the United States.

The power source  seems a unique feature of the ship on this postcard.  Notice the smokestacks in the middle of the ship, belching black smoke, while the sails billow from the power of the wind.  This ship utilizes both the old and new methods of sailing, steam engines and sails.

A careful examination makes this postcard truly interesting to contemplate.

Posted by Mike Brubaker, Executive Director at 9:22 AM No comments: