Fifty years before the federal mandate known as Title IX, sports for high school women seemed the norm in areas around Sherburne County.  With the conclusion of Women’s History Month, it seemed appropriate to acknowledge an earlier generation of female athletes competing in the high schools.

Referencing the earliest yearbooks available in the collections of the Sherburne History Center, the Elk River High School Women’s Basketball Team stands proud in 1921 and 1922.  Unfortunately, their record seemed less than stellar. In 1921 they posted a 1 and 4 record, and in 1922 their record ended at 2 and 4.  The simple fact that they played remains the important detail.  Not only Elk River, but Buffalo, Princeton, Anoka, and Monticello all organized women’s basketball teams.

Nationally the WCTU organized in 1874 urging abstinence from alcohol.  Beginning in 1878, under the leadership of Francis Willard, the group also advocated for prison reform, labor laws, and suffrage.  Many regarded the group as one of the largest and most influential of reform societies in the United States during the 1800s.

In Sherburne County, the WCTU organized late.  In 1895, the Elk River Star News reported meetings at the Elk River Methodist Church.  Not until 1910 did the WCTU formally organize in Becker.  The leadership included Mrs. Howard Reed, Miss Dell Clitty, and Mrs. C. A. Johnson.  Two years later, a chapter organized in Big Lake.

The chapters, apparently, held some influence.  In local elections held in 1911, while Elk River and Zimmerman voted to sell alcohol, Becker (by a slim three vote margin) voted to go dry.  According to the newspaper reports, Elk River had been dry for two years leading up to the 1911 vote.

Until national Prohibition became the law in 1920, groups in Sherburne County maintained an on-going debate about the deleterious effects of alcohol.  Local chapters of the WCTU clearly held some influence in the discussions and decisions.  An impact worth noting during Women’s History Month.

Posted by Mike Brubaker, Executive Director at 9:49 AM No comments:

Conservationist, 4-H advocate, and educator of children and adults; all terms that describe Ella Kringlund in Elk River.  An early promoter of Sherburne County and their natural resources, Ella Kringlund enthusiastically worked to boost conservation.  In the midst of Women’s History Month, it seems appropriate to make record of her life and her mission in Sherburne County. 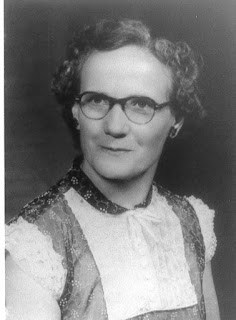 Ella Kringlund is long remembered for her work restoring the land that is today Sand Dunes State Forest.  Her memoirs record her efforts to plant a variety of pine trees in the area.  When her project began in the mid-1940s (and continuing until 1965) each season she organized a tree planting as a 4-H project.  In time, Ella Kringlund and her volunteers planted an estimate seven million trees.  Her efforts proved so successful, a Christmas tree thinning project also developed.

By conservation standards in 2000, the trees she planted may not fit the accepted norms.  Yet, her planting provided opportunity for soil regeneration; changing from the sand dunes of the 1930s to a better environment today.

In addition to her conservation work, she headed up the 4-H in Sherburne County, actively worked with county extension offices, and worked as part of the county fair board.  Rather than simply identifying her as an early conservationist, Ella Kringlund is better known as an educator, providing new ideas for improving the local environment of Sherburne County.  Certainly worthy of note during Women’s History Month.

Posted by Mike Brubaker, Executive Director at 7:26 AM No comments:

March being Women’s History Month it seemed appropriate to start off the month noting a significant settler and educator from Sherburne County: Grace Craig.

Born in 1865 in the family homestead in Orrock Township, Grace Craig lived with her parents, two sisters and a brother.  According to a brief biography, Grace Craig lived at the homestead for her entire life.  To a certain degree her education developed through her own initiative.  As a teenager, the biography maintains, she obtained the skills for Sunday School teaching through a correspondence course.  While teaching, for fifty-eight years, at two Sunday Schools around Orrock and Snake River, she also upheld the responsibilities as local superintendent.  In addition to her work on the farm and at the local churches, she also served as the Orrock Township correspondent and reporter for the Elk River Star News.

Throughout most of her life, transportation for Grace Craig consisted of walking.  In the last few years she owned a horse, Tom, to pull her small buggy around the area.  Her care for Tom reveals so much of the compassion she held for all of God’s creatures.  One Christmas event tells of her receiving a wonderful gift basket of fine food and treats.  She took the basket to the local merchants and exchanged the items for grain for Tom.  The day before her death, Grace dictated her final will.  She implored the Township Clerk to find a good home for Tom and dispose of her chickens and belongings to needy families in the area.

Born when the settlement of Orrock Township remained in its infancy, Grace Craig lived for eighty-two years.  Through several wars and multiple economic crisis, she witnessed the development of the county and contributed as an early settler of Sherburne county. She also exhibited the independence and self-assurance demanded of early settlers in Sherburne County.  Kicking off Women’s History month with a true pioneer seems appropriate.

Posted by Mike Brubaker, Executive Director at 8:06 AM No comments: