Farm prices and foreclosures in 1932 generated a radical reaction by farmers in Sherburne and Anoka Counties that revealed a unique effort at organizing the Minnesota farm industry into a unified organization.  After nearly a decade of falling produce prices and rising foreclosures, nationally, farmers organized what became known as the National Farmers Holiday Association.  More commonly known as the Holiday Movement, the group advocated for sympathetic refinancing on farm debt and it suggested the federal government guarantee farmers a minimum income to cover production costs.


The Holiday Movement, originally organized in Iowa, made itself known in Sherburne county in October 1932.  Farmers and sympathizers tried negotiating with the state legislature for relief in the midst of the Economic Depression with no results.  In the second week of October farmers set out pickets to prevent truckers from delivering produce to the markets in the Twin cities.  The pickets attempted blocking the roads leading from Elk River to Minneapolis.


The pickets received an unusual signal of sympathy from local police.  Police had organized the truckers into caravans, forcing the trucks through picket lines with minimal difficulty.  Blockades along Highway 10 the police escort halted the caravans and gave the picketers 10 minutes to appeal to the truckers to stop their deliveries.  After ten minutes the caravan proceeded into Anoka County and to their delivery points.


State Highway Commissioner Charles Babcock broke the protest a week later.  After investigating the issue, Babcock used the authority of the Highway Patrol to prevent any halting of traffic on state highways.  The picketers reacted to the law enforcement by placing nail studded boards and rubber belts in the roadway.   After a few days of this angry reaction the picket lines disappeared.  The protest was broken.


Briefly, because of plummeting farm prices and increasing foreclosures, the United States experienced a radical farm movement unusual to the industry.  Farmers in Sherburne and Anoka County played significant roles in expressing dissatisfaction to the state and national leadership.
Posted by Mike Brubaker, Executive Director at 11:56 AM No comments:

Ice harvesting developed into a significant industry in early Sherburne County.  Particularly around the City of Big Lake, ice earned a national reputation for purity and quality.  The seasonal work also established itself as a significant part of the local economy.  The lucrative process of harvesting the ice also proved tricky and dangerous. 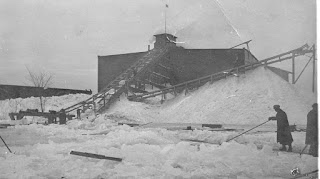 News reports in the 1920s and 1930s suggested a significant contribution to the local economy.  The Sherburne County Star News in 1925 quoted Justus DeBooy, the president of the Big Lake Ice Company.  He estimated harvesting the ice led to the employment of nearly 150 men on a seasonal basis.  He went on to suggest nearly 55,000 tons of ice would be harvested from Big lake alone.  The company warehoused 35,000 tons, while the Northern Pacific Railway company hauled away 20,000 tons for its own use.
The technique to harvest ice also provides interesting insight.  Ice is plowed and cross cut into 14 inch by 30 inch squares.  These squares measure 20 inches deep.   Next, deeper cuts form large rafts of ice.  These rafts are “floated” to a conveyor belt.  Final cuts are made to break up the raft and the ice loaded on the belt to be hauled into the warehouse.

Working on slippery ice, that is also floating free in the lake, the work can quickly turn to disaster if the harvesters are not sure footed.

Yet, each year, the ice on lakes around Sherburne County are harvested, sold to the railroad companies of shipped to larger metropolitan areas for public consumption.

A significant contribution to the county’s economy took place in the months of January and February of each year in the early history of Sherburne County.

Posted by Mike Brubaker, Executive Director at 9:48 AM No comments:

The cease fire to end World War One came on the eleventh hour, of the eleventh day of the eleventh month of 1918.  When news arrived in Sherburne County, celebrations started early in the morning and continued throughout the day.

“The Union church bell began clanging out the good tidings to the sleeping public” the Sherburne County Star News reported.  “Soon the school bell joined in.  A freight engineer went through town with his whistle blowing drum beats.”  The paper went on to report the community anticipated the news.  “Without any further information Elk River knew that Germany had surrendered.”
With the news, a spontaneous celebration involved the entire city of Elk River.  A spontaneous parade developed, taking over the main streets throughout the city.  Businessmen closed their shops and joined the celebration.  “Old and young were included in the ranks of the paraders,” the newspaper reported.  “Every conceivable noise making instrument was used in announcing the progress of the revelers.”

The entire country had been anticipating the end of fighting.  Unfortunately, one week earlier the local news had prematurely reported and end to the war, only to disappoint Elk River citizens with a retraction of the report.  In spite of the false report most citizens realized peace was near.

The readers of the Star News celebrated the end of the war and predicted this would introduce an extended time of peace.  “Never again will the wires carry such momentous news as was flashed over the country,” the paper predicted.  Unfortunately, only 23 years later, the wires carried news of a new war to end all wars.  The Great War would become known as World War One and a new generation of men would be called upon to defend the country.  But on November 11, 1918, the celebration carried the day.  The war ended and peace was at hand.
Posted by Mike Brubaker, Executive Director at 1:30 PM No comments:

With the fast approaching Veteran’s Day, we wanted to take a moment and thank all veterans for their service.  We also wanted to recognize some of the men who made the ultimate sacrifice for all of us.

Men who died in the service of their country from Sherburne County, Minnesota include:


This is not intended as a comprehensive list of men from Sherburne County who have died in service.  We would welcome any information about others who have served.

Thank you and have a safe Veteran’s Day 2017

Posted by Mike Brubaker, Executive Director at 8:51 AM No comments: