Manager of the Elk River Theater, Mr. Christiansen, developed plans to present an outdoor movie in conjunction with a band concert on Thursday evening, July 19, 1934.  With expenses paid for by a long list of business sponsors, “Arizona Terror” starring Ken Maynard became the first outdoor movie projected in Elk River.  The Elk River Star News described the presentation as “a story of an innocent cowboy who become a fugitive from justice.”  For audience members not favoring the western story line, the newspaper added, “a western love story helps keep up the interest, and there is a lot of shooting and adventure before it turns out happily.”

Mr. Christiansen developed a portable projection booth with sound speakers.  The plan developed to project the movie on a blank wall situated behind the Standard Oil Station.  Unfortunately , the presentation lacked crowd control.  “Some difficulty was experienced,” the paper reported.  “the projecting booth was hit by a truck and one of the lights was broken.  The crowd was not well handled and automobiles were parked in various positions leaving little room for people to sit or stand and watch the picture.”  The newspaper also estimated an overly large crowd at “close to 1000.”

After a few days to review the presentation and improve conditions, the outdoor theater projected a second movie on the next Tuesday, July 24.  Elk River police controlled the crowd and parking at this second viewing.  The smaller crowd and traffic control allowed for a pleasant presentation of another western, “Wyoming Whirlwind.”
The newspaper announced future movies after dark.  Unfortunately, the newspaper makes no mention of the later presentations.

The limited newspaper coverage may explain the limited memories of the first outdoor movies in Sherburne County.  These first movies, however, mark the development of a unique form of entertainment briefly available in Elk River.

Marking the history of Kemper Drug reinforces the significance of this landmark in Elk River.  This oral history collected from Bob Kemper provides new insight into the building and also contributes understanding to the business history of the city.


When I bought the store it was the only drugstore in town; and it remained the only drugstore for quite a while.  But, of course, eventually, all the grocery stores had pharmacies in them.  So, it’s quite a different picture, although Kemper Drug is still there.


My dad had a drugstore in Perham.  My older brother is also a pharmacist.  So, we grew up in the drugstore.  I worked in several stores after that.  And then, of course, the war came on; I went and joined the navy.  Then I came back and bought the store in Elk River.  My partner was my brother.  We also had the Perham drugstore.  Eventually, we separated and I owned the Elk River store and he, the Perham store.


Well, my dad had our drugstore in Perham, and when I graduated from high school, he asked me—I think the way he worded it—he said, “What do you expect now to make the world a better place to live in?”  I didn’t have an answer to that, so he said, until you know what you’re going to do, you can come to work for me.  So, I worked in the drugstore in Perham for a year.  And then, in the meantime, my father died and my mother died, and my brother and I were partners then and we wanted another store, so we bought a store in Elk River.


When I came here, I was the only drugstore in town; but a situation existed that was kind of bad.  All the doctors had their own dispensaries, so when you went to the doctor and you needed some pill, he’d get them.  He didn’t write a prescription.  Well, I kept working on it.  I thought eventually I’ll get the guys talked in to do thing the way they ought to.  And they could practice medicine and send the people to the drugstore.  But I had a pretty good business even without the prescriptions.  We had a soda fountain.  We were sitting on the corner.  Lot of cars by and traffic, and so we had a pretty good business without that.  But I wanted to get the prescription business a little better.  Eventually it happened.


Of course, about the fire: it was a cold, very cold day (January 6, 1960) a bitter cold day.  And we had opened the store and we had the hotel upstairs, too.  I owned that, too.  So, one of the clerks came to me and said, “Gee, there’s some smoke coming up on the side of the store here.”  And I went over there, and then I went down the basement.  Mac Hamlet, who took care of my store, the heating and whatnot, said the furnace acted up.  He had one of those fireman feeders.  He overdid it but says “I can fix it.”  So, I said, okay and I went back up to the store and everything was okay.  And then that clerk came back again and said, “there’s smoke coming up over there.”  So, I went down there and by that time, there was fire in the ceiling in the basement and Mac Hamlet was still there, and I said, “I guess we better get out of here.”  And then I had to go back to the hotel to be sure there weren’t any people there.


So, at any rate, it was a big day, and cold, and we had fire departments from Monticello and Anoka.  A lot of people working on that fire, and this is a bitter cold day.


It was a terrific blow.  And, I didn’t know quite what to do.  I had several people helping me, had some ideas I should find a place in town the would rent.  And people sent me back to Minneapolis to get some stock.  I went back to the wholesale drug company and told them what happened; and they were all excited.


Of course, now we lost the hotel upstairs, which was really not such a bad deal.  I didn’t like the hotel business.  So, I didn’t have that big building anymore; and I built a nice new building.  It almost, you might say, worked out pretty good for me.


Bob Kemper rebuilt and the building standing on the corner of Highway 10 and Jackson Street remains a significant landmark to the city.

Posted by Mike Brubaker, Executive Director at 11:37 AM No comments:

Betty Belanger lived her entire life in Elk River.  She was born to Hungarian immigrants north of Elk River.  In the household, Hungarian was the language of choice until Betty started school at age six.  Although a brief excerpt of her longer oral history, Betty provides interesting insight into growing up in Elk River:

I was born on the farm with a midwife who was a Hungarian immigrant.  She delivered a number of babies for the Hungarian moms in the neighborhood.  Her name was Theresa Toth.
I grew up on the farm and started school at age six.  I fought with my parents to not make me go to the little country school.  I wanted to go to the big city school and ride the bus.  So I did go to school in town, in Elk River at the wood frame schoolhouse.  The Handke building was already built by the time I started school.  The senior high was over there in the new brick building and we were still in the wood frame building.  We rode the school bus for a long time because there were only a few buses, so we had a good one hour ride (each day).

Downtown Elk River was awesome back then.  We knew all the businessmen and all the businessmen knew all the citizens around here.  It was really neat.  The best part of downtown Elk River was the park. With this wonderful gazebo, we had band concerts every Thursday night.  So everybody went into town for the free band concerts, and farmers did their shopping and listened to the music.  It was an awesome gathering of a community.

My mother never went to town.  She never learned English well enough to be able to communicate with the store keepers.  But my dad and brother would go into town with the milk check and if I hollered loud enough they’d take me along and maybe I’d get an ice cream cone.

Once a month the milk check would come in the mail from the Princeton Milk Producers Association then the next day he would go to the bank, he would cash the check, make his mortgage payment, and buy groceries.  And they could go in the bar and have a beer and buy me an ice cream cone.

My father did dairy farming, but he also dabbled.  We always had a lot of chickens.  We took the eggs into the grocery store to sell.  I can remember going in the back room where the grocer would “candle” the eggs to make sure they weren’t fertilized.  And then the ones that were okay he would accept and he would pay my dad for the eggs and then Dad would use that to buy groceries with.

Betty Belanger’s memories are rich in detail.  In discussing the business district of Elk River, she remembered a multitude of stores and businesses.  She explained the telephone company had offices and the switchboards upstairs above the Bank of Elk River.  She remembered the Fairway Grocery, the Federated Store, Dare’s Furniture and Funeral Home, Andy’s Electric, The Golden Pheasant, the bowling alley and the movie theater.  Like so many of the oral histories collected at the Sherburne History Center, Betty’s memories are truly rich and valuable. This brief excerpt provides a sense of growing up in Elk River during the late 1940s.

Posted by Mike Brubaker, Executive Director at 12:21 PM No comments: 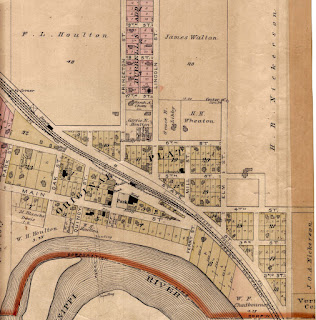 An absolutely fascinating collection at the Sherburne History Center includes the many maps of the communities and the county.  This image is a portion of an Elk River map, probably dating around 1895.  The map contains the original street names of Jackson and Highway 10, originally Princeton and State Street.  Looking closely at the map, the two original hotels, located on the corner of Princeton and State Street, and near the corner of Main Street and Quincy, show themselves.

Exploring the growth and development of Elk River is an interesting process.  Using the maps from the collection enhances the research.

Posted by Mike Brubaker, Executive Director at 1:42 PM No comments: