The Grasshopper Plague in the 1870s

The sky was black, dark, almost like a coming storm.  But as the clouds moved closer a shrill hum seemed to accompany the storm.  Only when the cloud finally arrived was it apparent: this was no rainfall, no simple burst of water from the sky.  Instead, the heavens dropped an invading horde of grasshoppers, more specifically Rocky Mountain Locusts, upon the farm lands of Minnesota.  Arriving first in 1873, and for the next five years, in a seeming random pattern a plague of locusts returned to devour the crops of farmers throughout the state.

Various descriptions of this five year plague contain consistent themes.  The grasshoppers came, devouring everything in their path.  First chewing and destroying the grain crops, then any green plants that might remain.  In an effort to fight the destruction, some farmers tried covering plants with blankets and other cloth.  The grasshoppers ate the fabric.  Other reports describe the grasshoppers eating leather harnesses of plow horses.  The horde even fed on fence posts and ax handles.  Nothing was safe from the ravenous insects

In the five years of the Minnesota grasshopper plague, the losses were devastating.  An estimated $2,000,000 was lost by farmers.  By 1877, the state was so frustrated by the inability to combat the locusts, Governor John Pillsbury declared a day prayer for April 26, 1877.  In Cold Springs, Stearns County Catholics built the Assumption Chapel as an outward sign of their devotion and prayer so that God might remove this plague.

Reports of the grasshopper plague describe devastation throughout Minnesota.  Anecdotal evidence in Sherburne County reinforces these views.  Jeanette Knapp, living in Orrock Township remembered the locusts destroying the family crop.  “Father noticed how nicely the grain had come up and how strong it looked—that was when he was on his way to church one Sunday morning.  On his return he could see no evidence of his crops.  Even the leaves were eaten off the trees,” she said.  “At times the grasshoppers were so thick you couldn’t see the sun.”

Sherburne County does not show up in the greater Minnesota literature of the grasshopper plague.  The county avoided significant damage from the locusts until 1876 when the grasshoppers invaded like a marauding horde and did significant damage to the county farms.  In addition, the county was relatively under populated.  The population in mid 1870s was in the neighborhood of 3000 people.

Yet, the grasshoppers hit Sherburne County and left an indelible mark on the history of the area.

This particular essay may benefit from a list of references.  If you would like to obtain a copy of this essay with the endnotes, fell free to contact me.

Posted by Mike Brubaker, Executive Director at 9:19 AM No comments:

As you research the history of Sherburne County, or Minnesota for that matter, a collection of documents you might want to consider viewing are the Public Safety Commission Alien Registration and Declaration of Holdings Forms, from 1918.  The records are held by the Minnesota Historical Society.  Microfilm copies of the Sherburne County records are available at SHC

These records, the alien registration forms, contain a wealth of information.  They were collected in the early days of World War I.  The Public Safety Commission set out to identify and document the individuals and the property holdings of every alien living in Minnesota.

The Commission was created by the State of Minnesota, a board of seven members: including the Governor, the State Attorney General and five members appointed by the Governor.  Early in 1918, the Commission issued “Proclamation and Order No. 25” designating the week of February 25 to March 1 as Alien Registration Days.  Every resident alien, anyone not native born or naturalized citizens, over the age of 14 was required to register and give declarations of property. 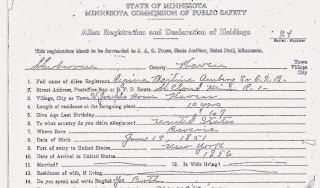 The registration forms collected information on a broad range of topics, from name and date of birth, to immigration date, to citizenship status and why the individual has not become a naturalized citizen.  The questions and answers provide great information about individuals living in the state.  The registration of aliens was vigorously carried out.  In Sherburne County, the registration commission employees went so far as to document nuns living in the Sherburne County area of Saint Cloud (a portion of the form you see here).

The information on these forms offer some great information.  For family historians or local historians, the Minnesota Public Safety Commission records provide an opportunity to gain greater insight into our families, into our county, and the State of Minnesota.   The collection has been arranged by county and subdivided by community.  The microfilm collection at SHC opens a new window into the lifestyles of residents in Sherburne County.
Posted by Mike Brubaker, Executive Director at 8:39 AM No comments:

What’s In A Name?  Actually, quite a bit.  I want you to meet Andrew A. Dahl, from Danetown, Santiago Township, Sherburne County, Minnesota.  He was born in Denmark, in 1857.  His father was Anders Jorgenson Dahl.  As was the custom in Denmark, Andrew’s last name then became Anderson.  Andrew immigrated to the United States in 1879 and quickly settled in Sherburne County.
All of this back story is important because Andrew and his wife Mary settled in Danetown.  There was an abundance of Andersons living in the area.  So much so, that produce checks from the Minneapolis markets to the farmers often got mixed up and delivery became very confused.
The story goes: Andrew, in an effort to simplify his life and insure that he received his produce checks, legally changed his name to Dahl.  This name change occurred sometime after 1900.  The court record continues for a generation when at least one of his four surviving children had to again visit the court and petition for a name change on the birth certificate.  Frank Dahl, born in 1901 under the name Frank Anderson, received a court order to change his name on all documents, beginning with a birth certificate and continuing forward.
This is an interesting story for a variety of different reasons.  For the benefit of family historians and local historians, keep in mind that name changes are an important consideration in the research.  It also puts an end to the assumption that every Anderson, Olson, Peterson, and every other common name individual is related.  Names are vital to historic study, but we can’t accept, or reject, every name based on a first read glance.

Posted by Mike Brubaker, Executive Director at 9:04 AM No comments: