The namesake of the City of Becker, George was born in Locke, New York in 1829.  He arrived In St Paul in 1849.  Elected Mayor of St. Paul in 1856 for a one year term.  Still later, he twice ran unsuccessfully for Governor.  Important for the Sherburne County story, he worked for the Saint Paul and Pacific Railroad.  From 1885 to 1901 he served as a member of the state railroad and warehouse commission.  His primary interest in those years, he promoted railroad interests and development throughout the state.

Although never a major stop on the railroad lines, Becker and area farmers utilized the rail service to ship produce and goods.  Equally important, the road delivered a multitude of immigrants to the county.  Through the 1870s an Immigrant House operated in Becker to welcome new arrivals to the community.

There isn’t any evidence to suggest George Loomis ever set foot in the community, yet his influence set the direction for the community of Becker into the 1900s.
Posted by Mike Brubaker, Executive Director at 11:39 AM No comments: 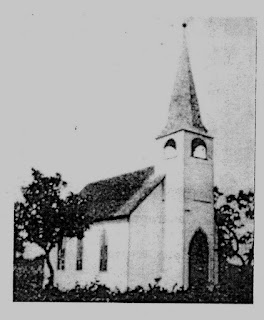 The community first organized as a group of Swedish Lutherans living in an area known as the “Roman Settlement.”  Named after Axel Roman, one of the first settlers of the area north of Big Lake.  Officially founded on 25 January 1892, the congregation first met in area schoolhouses.  Through donations and sweat equity, a church was built.  Descriptions of the church wrote of arched windows, a tall steeple with a bell tower at its peak.  A small barn was built on the back of the church for the horses.

Willard Moey, in his history of Saron Lutheran Church 100 anniversary, wrote the congregation named the Church “Saron,” the Swedish spelling of “Sharon.”  In Biblical references, the Plain of Sharon was the most fertile part of the coastal plain of Palestine.

Over the years, the congregation grew and prospered.  Albert Magney, born in April of 1892, was the first child baptized by the new congregation.  Since then several thousand baptisms, marriages and burials have marked the history of Saron Lutheran Church.


The original arched window chapel is long since gone.  Yet, the people of Saron Lutheran Church continue to meet and the congregation continues to grow.  Congratulations on 125 years of community worship.
Posted by Mike Brubaker, Executive Director at 7:41 AM No comments:

Prohibition and Moonshining in Sherburne County

Prohibition, wet versus dry, has long been an issue in Sherburne County.  In 1895, temperance advocates met in the Elk River Methodist Church to urge prohibition in the county.  Wet advocates countered with assertions regarding the economic benefits of alcohol.  Their position insisted saloons would increase trade and business in local economies.  The Sherburne County Times went so far as to predict annual income from alcohol licensing exceeding $2000 for the county.  As early as 1899 the Times newspaper, reported the organization of a local chapter to the Women’s Christian Temperance Union, the WCTU.  For two decades before national Prohibition took effect, Sherburne County voters regularly debated and voted on the issue.  Passions ran deep with each election held.

National Prohibition (from 1920 to 1933) did not end the debate, it simply sent the operation of boot legging underground.  Reports in county newspapers, police records, and oral histories all indicate an active boot legging practice in Sherburne County.  Regarded as more prevalent in counties north and west of Sherburne, boot legging seemed popular in the local areas.  Court records noted a number of illegal distilleries in Palmer, Livonia, and Elk River townships.   In 1928, the Sherburne County Star News reported the “biggest still ever found in Sherburne County was confiscated.”

Oral histories reinforce the popularity of boot legging.  The memories of Betty Belanger seem typical of the times, “There was a still buried on our homestead, my parents’ place.  [It was] buried in the back yard because the guy that owned it heard the feds were coming again and he had already done time in prison for moonshining.  So, he brought the still over to my dad’s farm because he knew the feds weren’t going to be checking on my dad.  They buried it in the farmyard in the sand, in the back yard where the milk truck went around in a circle.  So it was covered.  There wouldn’t be any sign that they had buried something in the yard.  [I think] it’s still there.”

Income for the distilleries provided significant wealth and encouraged many boot leg operations.  In 1920, the County Sherriff reported purchasing “one quart of whiskey, charging and receiving therefor the sum of six (6) dollars.”  An inflation calculator suggests the price of “one quart of whiskey” in 2016 would be $81.

The manufacture and distribution of distilled alcohol significantly impacted the local economy.  The debate remained passionate.  As the temperance advocates suggested, “the unrestricted liquor traffic is today the most evil influence upon the moral and social health of the community.”
Posted by Mike Brubaker, Executive Director at 7:54 AM No comments: