Becker, Minnesota once claimed the title of “Strawberry Capital” of the Midwest.  All thanks to the work of Becker farmer Carroll “Strawberry” Johnson.

Born in December 1918, Carroll Johnson’s work in agriculture led to significant developments in farming, particularly for strawberry farms.  His work in marketing and promotion helped make Becker famous for its strawberries.

Starting in 1936, the summer after his High School graduation Carroll Johnson planted a few strawberry plants and sold the produce door-to-door.  In the fall he attended the University of Minnesota, majoring in horticulture.  Each summer he would return to his family farm and increase acreage devoted to strawberry plants.

Overtime, Johnson continued selling to the local markets, eventually expanding as far as Fargo, North Dakota.  He also increased the size of his farm.  At its peak in the 1970s, the Johnson Berry Farm extended to over 150 acres.  Agriculturalists described the farm as the largest strawberry farm in the Midwest.  Johnson also adopted a “pick your own” strategy for marketing.   Allowing individuals access to parts of his farm to allow them to pick their own berries.  News reports suggested families would travel from throughout the state to visit the Johnson Berry Farm.  A report from WCCO radio claimed two women hired a taxi to bring them from the Twin Cities to the Johnson farm.  The cab driver then had to wait while the ladies picked berries. Throughout his career, Johnson continued to experiment with plant varieties and planting methods.  Johnson and Marion Hagerstrom hold the patent on the “Crimson King” strawberry.  Johnson was quoted as describing the berry as, “a bigger, brighter berry that holds up.”   Johnson also helped develop the “Luscious Red” and the “Red Rich” varieties of strawberries.

His planting experiments included alternate plantings of four rows of berries to two rows of corn.  At the end of the season, the corn stalks remained in place to catch and hold the snow as an insulator to protect the strawberry plants.  “It also stops the wind,” he explained.

Johnson also played a key role in promoting Becker as a destination point for strawberry lovers.  In the mid-1960s, The Becker Strawberry Festival played a significant role for promotion and entertainment in each growing season.

Johnson worked and developed strawberry farming for more than 50 years.  His efforts made Becker, Minnesota the “Strawberry Capital” of the Midwest.

Posted by Mike Brubaker, Executive Director at 11:49 AM No comments: 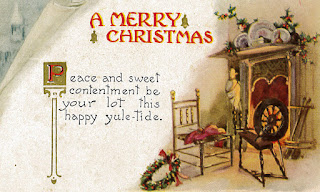 Christmas greetings from another time convey a different message than greetings from today.  In the past, a wish for peace and serenity seemed more prevalent.  A comfortable chair near a soothing fire, or a calming scent of pine from a bouquet of evergreens, presented wishes of peace and joy.  The absence of Santa Claus jumps outs as an interesting feature of early Christmas postcards.  The message is similar, yet the images and symbols changed dramatically. 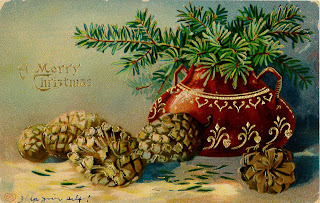 Here is hoping that: THE JOY AND SERENITY OF THE CHRISTMAS SEASON FOLLOW YOU THROUGHOUT THE COMING YEAR”

Posted by Mike Brubaker, Executive Director at 7:36 AM No comments: 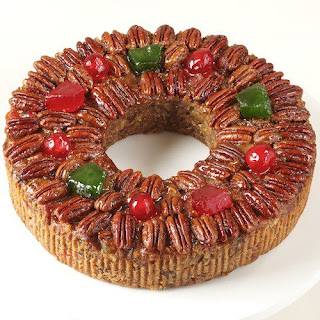 A brief report in the Sherburne County Star News illustrates the durability of fruit cake through the ages.  “Mrs. Elizabeth Dyson who died 17 years ago, for several years before her death suspended a fruit cake upon the Christmas tree for Rev. And Mrs. Shepardson, and though dead, the Christmas cake continues to appear annually.  Her works do follow her.”

And a MERRY CHRISTMAS TO ALL

Posted by Mike Brubaker, Executive Director at 8:28 AM No comments:

Exactly 100 years ago, electricity was a novelty in Elk River.  In the year 1916, a new company, Elk River Electric built a power plant and installed lighting throughout the village. Until the work of F. D. Waterman in 1915, the only buildings to have electricity were the Blanchett Hotel and the Opera House.  These were powered by gas fueled generators.  Elk River developed very quickly into “a most modern” community.

Beginning in 1912, Fred Waterman opened negotiations with the village to build a dam and power plant for the city.  The city itself agreed to maintain power lines and serve as the go between for customers and Waterman’s Elk River Electric Company.  After three years of struggle to find financial backing, the plant was built and power sent through the city in January of 1916.  Immediately, the streets of Elk River lit up.  The Sherburne County Star News explained, “for lighting the streets 40 sixty candle power and 10 one hundred candle power lamps are being used.”

With construction complete, the company advertising campaign moved forward.  Newspaper advertising announced, “We have spared no pains or money to have Elk River retain its present envious reputation of being the best town of it size in the state by giving it the best lighting system.”

With Christmas 1916 approaching, the company took a new direction in advertising.  “Electrical gifts have charm, beauty, and utility,” the company urged customers to buy the latest in new electrical appliances.

Although it would take another 40 years before electricity would reach every corner of the county, Elk River took a big step forward in lighting the city in 1916.

Posted by Mike Brubaker, Executive Director at 9:20 AM No comments: