Only ten years after nuclear power proved its strength, the Rural Cooperative Power Association of Elk River developed a campaign to introduce nuclear energy into the upper Midwest.  According to a proposal submitted to the Atomic Energy Commission in June 1955, a nuclear plant in Elk River could reduce electricity production costs by fifty percent in five years.

The Atomic Energy Commission looked favorably on the Elk River proposal.  In 1958, they granted approval to the project and construction began on this unique project.  After five years of construction, the reactor first generated power and became the first reactor operated by a rural cooperative in the United States.

Unfortunately, the experiment at the Elk River plant failed.  After five years of operation, the plant closed in 1968.  Officials reported the plant lacked cost effectiveness.  By 1975 the entire reactor had been dismantled.

Posted by Mike Brubaker, Executive Director at 7:20 AM No comments: 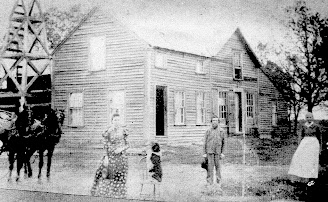 Recent discussions of early settlement presented an individual to consider as a pioneer serving a significant, yet unheralded, role in the settlement of Sherburne County.  We need to look at the life and times of Joseph F. Bean of Livonia Township.

Joseph Bean spent his childhood and early days in New Hampshire.  He made his way to Sherburne County, stopping first in Wisconsin before landing in Elk River.  Finally, in 1856, he and his new bride, Betsy, settled in an area of Livonia Township.

The Bean homestead located on the stagecoach road between Elk River and Princeton.  In addition to farming, Bean also provided rest to travelers along the road.  He also served the role of Postmaster, the mail for area farmers being delivered by stage and later by the early morning trains.  In addition, both Bean and his wife Betsy emphasized education.  Both worked as teachers before settling in Livonia Township.  Evidence suggests the Bean household served, for a time, as a school.

A fire, in 1891, destroyed the original farmhouse.  The family quickly rebuilt their home and continued to farm and provide services to the community of Zimmerman, that developed just east and south of the Bean farm.

Comparing the Bean family history to other early settlers, a pattern becomes evident.  Much like the homestead of Orlando Bailey, Joseph Bean established a farm while providing a rest stop for travelers along the road.  In addition, he provided services as the postmaster and may have opened his home as a schoolhouse.

With all of this work and community service, Joseph F. Bean and his family clearly contributed to the settlement of Sherburne County.  They were important, early, pioneers in the County.

Posted by Mike Brubaker, Executive Director at 12:20 PM No comments:

The anniversary of the atomic bombing of Japan arrived this week. It seems an appropriate time to recognize the impact of the war on Sherburne County. Unfortunately, and tragically, World War Two impacted everyone. Whether through rationing or military service, or a multitude of other means, every individual in Sherburne County, between 1940 and 1945, felt the war.
An oral history collected from Edmund Babcock makes an interesting point of this: “When my high school class had its fiftieth reunion, we invited every class member to get up and take the microphone and tell a little bit about what had happened in their life since graduation from high school. We invited a dear lady who was one of those teachers that everybody in the class knew and liked. She was getting to be an elderly person at that point. Her daughter, who happened to be a medical doctor, drove her out from Minneapolis and stayed with her through the whole evening. We had a reception the next day, and at that reception, the lady’s daughter was there again. I got into a conversation with her, and she said, “That program last night was just a memorable thing for me because each of you got up and started saying, ‘I joined the Navy,’ or ‘I joined the Army,’ or ‘I joined the Marine Corps’, or the girls said that they took a job or they joined the service or that they got married and their husb
and went into the service.” She said that she realized that the war had an effect on everybody and changed their lives, but it had never come true to her so clearly until she heard each one of these high school graduates begin to tell their story, and, because it was a wartime story, she realized that the war had a real effect on everybody, and it changed everybody’s life.”
For Babcock, wartime service meant joining the Naval ROTC while at the University of Minnesota. Later, he served aboard a troop ship in the Pacific theatre of the war. “I finally was commissioned in December 1943 at the university, and I’d never been on a ship, but I was commissioned as an ensign,” he remembered. “I was assigned to a cargo ship, the Alnitah, the AK127. It was essentially a liberty ship, a ship that had been built in a hurry. There were many of them constructed. This particular one that I was assigned to was designed to carry troops. They weren’t carried in much style. “
“I was in Pearl Harbor the night the war ended,” Babcock said. “Coupled with the end of the war was the announcement of the atomic bomb and the damage in Japan and Nagasaki. This was another one of those events that you never forget. You remember where you were and when you heard about it. Somehow, it sticks with you.”
With the end of the war, Babcock returned to the University of Minnesota, earning a bachelor’s degree in business administration and a law degree. And, as his reminisces make clear, World War Two impacted everyone in Sherburne County.
Posted by Mike Brubaker, Executive Director at 11:45 AM No comments: