Occasionally, we recognize veterans and their actions during the wars of the 20th century.  The actions of Jack Bade, Frances Beck, and Charlie Brown have all been documented on these blog pages.  We need to expand the borders of Sherburne County to acknowledge the bravery of another young man from central Minnesota.

In 1943, Malcom H Trombley, from Rogers, served in the United State Army.  As a private, he worked as part of an armament crew.  The crew loaded bombs into planes in the China-Burma-India theatre of World War Two.

The newspapers noted his bravery in service when he rescued his entire loading crew from near disaster.  According to the newspaper reports, a crew member noticed a burning fuse on a bomb as the crew loaded it into a plane.  The entire crew ran for cover, fully expecting to die in coming second.  Trombley bravely removed the fuse from the bomb and threw it in the air just as it exploded.

Although never recognized from the Army, Trombley’s crew mates acknowledged his courage.  A notice posted on a bulletin board in crew barracks read: “Private Trombley—who in the face of grave danger to himself, did on April 6, 1943, remove from a demolition bomb the tail fuse, which had been made live.”

The notice went on to say, “We the guys who came so close to saying ‘hello’ to St. Peter, offer Private Trombley our thanks and are sorry we don’t have the power to award him a medal appropriate to the bravery displayed.”

With the end of the war, Private Trombley returned to central Minnesota and a quiet life.  Little mention of any of the brave actions he took during his years in service.  Yet, a tradition of recognizing veterans of the World Wars remains an important feature of many blogs posts and social media that we happily join.

Posted by Mike Brubaker, Executive Director at 9:29 AM No comments:

National Ballpoint Pen Day: Memorable in More Ways Than One

This past week we failed to recognize National Ballpoint Pen Day (June 10).  In an effort to rectify this gross oversight, today we note the significance of this significant invention and the impact on local history.

Patented in 1888 in Argentina, the ballpoint pen slowly spread throughout the world.  On June 10, 1943, the international patent was filed with the United States Patent Office.  Today the ballpoint pen sells more than 57 pens per second throughout the world.  It is also the most widely used writing instrument in the world.  It’s design simply puts a steel ball at the tip of a tube of ink.  The rolling steel ball regulates the flow of ink for an even application to paper.

An ingenious design, the inventors and early marketers overlooked a valuable sidelight of the pen as a marketing tool.  Today, a multitude of pens carry advertising for businesses throughout the world.  With the ballpoint pen, the evolution of business and marketing can be followed.

In the case of Sherburne County, in the collections of the Sherburne History Center a variety of pens document business in the county.  In the collection we have pens from gas stations, such as Charlie Brown’s Shell in Elk River.  We have a pen to help document Northern States Power Company.  Pens from Sherburne State Bank and AgStar Farm Credit Services help record the history of financial institutions in the county.

Posted by Mike Brubaker, Executive Director at 8:34 AM No comments:

Be Sure to Commemorate National Donut Day 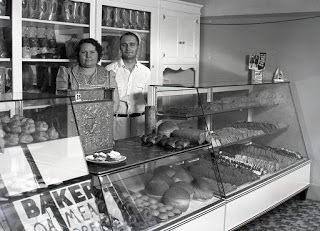 I just now posted on facebook a photo to commemorate National Donut Day.  Although the day sounds like a frivolous marketing tool for the baking industry, in reality it does have a serious, memorable component.  The celebration began in Chicago in 1938 to honor the members of the Salvation Army, particularly, women that handed out donuts to soldiers during World War One. The Salvation Army also hoped to use the day as a fundraiser to help people in need caused by the crisis of the Depression.  The celebration continues on the first Friday in June.  So, with that in mind, we want to honor NATIONAL DONUT DAY!  Here is a photo of one of the more famous of Sherburne County Bakers: Bake Anderson in his shop in Elk River.

Posted by Mike Brubaker, Executive Director at 9:15 AM No comments: