More Letter From Somewhere In France

A few weeks ago, we shared a few lines of letters from Pvt. George Bostrom to his sister.  Bostrom, originally from Elk River, served in the American Expeditionary Force in France during World War One.  Here is a second portion of a letter in 1918 sharing conditions in France in the last days of the war: 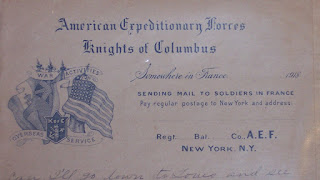 Well Sister, I’m in the lines again and have been for some time.  I think we will move soon, possibly little further to the front because we are kind of in reserve here although we aren’t so very far from the front. Suits me alright tho because back here we would be an excellent target for the (Germans) if they had a mind to open up their big guns on us.  There has been some of their medium sized shells come our way at different times.  The other night they sent ove3r a few that made us wonder if they really had come with our names marked on them but I guess they must have misspelled them.  I shouldn’t joke that way.  It hurts me when I hear others talk that way but here I am writing it.

Well I will close for this time.

Posted by Mike Brubaker, Executive Director at 8:26 AM